ATTENTION: If you’re a webcam model who’s had trouble making money on Chaturbate, your camming career is about to turn around. I’m revealing EXACTLY which tactics the top models use to make HUGE bank on the biggest cam site of the bunch (the third tip is amazingly effective!).

When you’re a webcam model trying to decide on a cam site to use for your online booty-shaking, you have a number of solid options – but really, these days there’s just no controversy on which is the best choice. When all factors are considered, Chaturbate is just amazing for the models, being both the easiest to use and potentially most lucrative of the crowd.

For one thing, it has truly enormous traffic, even when compared to the other big cam sites, so there’s an advantage in sheer number of eyeballs likely to fall on your jiggling booty. Chaturbate also has a wide variety of apps and bots that assist models in running their channels, which saves time and increases convenience.

More: How Much Money Do Chaturbate Models Make?

And because of its reputation, the site tends to attract the “highest quality” members, which in this context means the biggest spenders. The Chaturbate money is definitely there, and there’s a lot of it; cam girls and guys are making a killing on that platform. Unfortunately, plenty of newbies on Chaturbate are also playing musical chairs and disappearing after a couple of weeks, having failed to earn much of anything.

It can be really frustrating to watch, because the difference between the spectacular success stories and the dismal failures boils down to just 3 pretty simple marketing techniques and their proper application. These strategies are simple to learn, and they’re devastating when put into practice.

The first of them is just common sense, really, but I think you’ll be amazed at how easy to employ even the remaining two are (which aren’t quite as intuitive). Read to the end, here, and you’ll be making money on Chaturbate like a pro in no time!

If you don’t yet have a Chaturbate broadcaster account, get one now. It can take a couple days to get approved.

Even for those who weren’t aware of this in terms of its importance to the quest to make money on Chaturbate, the part that should be staring all of us right in the face is the underlying principle here: People are more likely to buy from you, and will do so more readily, if they personally like you.

This effect applies pretty much across the board (all industries), and there is no overstating its power. In its most potent form, your customers will come to you because they want to do business with you at least as much, if not more, than they actually want what you’re selling. In other words, giving you money makes them happy, because they want YOU to be happy.

More: Check out my Newbie Guide to Becoming a Cam Girl here…

Regulars are your lifeblood as a cam model; it really is that simple. They’re the main reason it’s so important to set a schedule and stick to it consistently – so people who like you can find you again and start liking you even more. This is also a domain in which we can utilize the advantages of performing on Chaturbate as opposed to some other platforms.

When you see that a member is tipping you and is active in your chatroom, you should engage him as much as possible. Flirt with him in public chat, use private messages to explore his kinks, and just generally get close. Forming friendships with members is the best way to create regulars.

Because when members do come back to your chat room, you don’t want to waste time getting friendly with the ones who nevertheless don’t intend to spend anything. Chaturbate helps you tell which is which by color-coding the screen names of people watching you: Those in blue and purple have recently purchased on-site tokens, while the ones with gray names haven’t.

Chat up the guys who’ve got the cash to lay out. Talk about your life, complain about your family, and seize upon mutual interests. Connect with them on a human level, and before you know it, you’ll have more than a customer who likes what’s for sale: You’ll have a friend who likes YOU. And when someone likes you, they want to buy from you.

Here, you can use a trusty cellphone app that has become a mainstay in the webcam model world to promote your camming shows and warmup your audience, resulting in greater revenue. By expanding beyond Chaturbate and using Snapchat intelligently, your Chaturbate money will grow BIGTIME.

More: Check out my Public and Premium Snapchat Guide here…

It may come as a complete and traumatizing shock, but cam site members absolutely love free stuff. It’s probably because they know a cam girl’s show can be enjoyed without cost, so they aren’t in a mode to spend money (this doesn’t mean that they can’t be monetized or that doing so is even especially difficult; don’t fall into the trap of thinking that).

So when you post a link in the chatroom to your public Snapchat account, simply offering it as something fun for them to look at for free, they’ll jump at it. Seriously – much of the time, MOST people in your room will at least look. It’s like a river of clicks from which you can draw at will, which is an ENORMOUS resource in marketing.

What’s on this Snapchat account? Simple: You. Post general stuff about your life and interests, and pictures of you engaging in your favorite activities. Make this site a place where your viewers can come to learn more about you, and in so doing, develop a sense of familiarity with and closeness to you.

Of course, also use it to talk about your work as a cam girl (that’s part of you, after all). Always post a notice when you go online on Chaturbate, so your followers know to tune in. And on occasion, put up “challenges” in which you announce that you’re trying hard to reach a certain amount of tipped tokens this month.

More: How To Make Money on OnlyFans

Remember, your fans care about you personally; so long as it’s reasonable, they will rally together to help you reach your goal. Offering a small reward (a video of you twerking that azzz, for example) to anyone who helps will stimulate the effort. People are goal-oriented creatures, so when you give them something to shoot for, it can activate them like little else can.

In the world of webcamming, “collabs” occur when two or more models get together physically and broadcast as a team. This tactic benefits the one with the smaller audience the most, but it really helps all models involved to make money on Chaturbate.

The idea is that if multiple models are on cam together, all of their followings will be interested in checking out the show, resulting in a much bigger total room count. This makes their collab itself potentially very lucrative, but even more importantly, it allows for fans of each to take a liking to the other and begin visiting her chatroom (and, eventually, maybe tipping her) as well.

Most collabs involve only two models broadcasting together, but any number of models can join forces to do a single collab. This is easier to set up than you might think, because those with experience in the business know that the more girls and guys go on camera, the bigger the interest and potential returns will be. Bigger room counts mean more tippers, and higher levels of tipping can generate even more tipping (through competitive pressure). Yes, it can snowball.

Tipping often depends on the level of energy present in the chatroom. When there are lots of people in there chatting, joking around, and tipping, more members will feel comfortable breaking out the plastic and letting their tokens flow freely.

So, collabs can be an extremely effective way to make money on Chaturbate; many webcam models will travel great geographic distances to perform together, happy to make the investment in the well-founded hope that it will prove profitable. But if you live in a relatively large metro area, you’re likely to be able to find more than a few cam buddies to share the spotlight with. Putting out feelers on Twitter is a great way to find partners. The connections you make doing this can pay dividends for years, trust me.

Webcam models regularly arrange trips to go visit other models for collabs. Not only do they cam together, but they also tend to shoot video content, do Snapchat shows, and share “tricks of the trade” that bring in more money.

If the option is open to you, another kind of “collab” is to simply perform as a couple with a male model (your real-life boyfriend or otherwise). Male-female cam shows reliably generate a ton of interest, and draw in fans like a magnet. In fact, couples shows can be the single best trick to use if you’re trying to boost your exposure on a cam site like Chaturbate.

So there you have it. It’s really not rocket science; just remember and apply these simple techniques, and you’ll be making a solid Chaturbate income in no time! Again, if you don’t have a broadcaster account on Chaturbate yet, be sure to get one now so you can use these tactics and bring in the mega money on the pronto!

Because I love bonuses almost as much as I love weed, I’m going to lay out an extra tip that can really boost your earnings on Chaturbate into the big leagues. You may have heard of the Lovense Lush remotely-controlled sex toy?

The Lush is probably the single most popular sex toy on Chaturbate, and cam girls who use it on cam generally enjoy seriously enhanced token totals. It should come as no shock that cam site members enjoy the idea of “buzzing” webcam models with their tips, so it makes sense.

If you don’t yet have a Lovense Lush, you should seriously consider making the investment, because this thing is a major moneymaker.

Chaturbate has apps that can control the Lush when tips are made, so it’s super simple to run these shows. I’m continually amazed at how much of a difference this one toy makes with models who try it out. This is one of the best money-making tips I can give you, honestly.

Check out the Lovense Lush here… 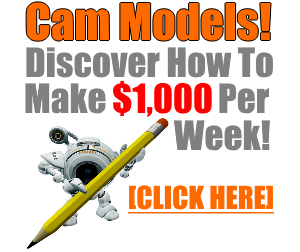